With Their Backs to the Wall

Stand up for their rights

By chance, INK Sonntag-Ramirez Ponce, who has been taking a stand for children and their rights since her youth, received a photo album in 2009. The folder contained pictures that were taken in connection with a children’s aid project in the Philippines. Several photos showed small children crouching against a wall. Two of the children wore clothes that the artist’s children had once worn, which she had given to charity.

Taking this as a “wink of fate”, INK made it her very personal mission to work for this project; to stand up for the rights of children in the Philippines with her art, to draw attention to child prostitution, stray kids and children born in prison – circumstances that unfortunately are a part of everyday life for many children there.

In the person of Father Shay Cullen, who is founder and director of the children’s aid project PREDA Foundation in the Philippines, as well as in the association “Tatort-Straßen der Welt e.V.”, Cologne, INK found strong partners, who do not only ensure that financial donations are used for the best of the children.

The artist provided information at events and exhibitions about children’s rights together with the “commissars” of the Cologne “tatort”, Klaus J. Behrendt and Dietmar Bär, who, being more than concerned about the living situation of many Filipino children after the film shooting of “tatort Manila” in the Philippines in 1997, founded the association with other activists. Joe Bausch, forensic doctor in “tatort”, medical doctor and author in real life, even travelled to the Philippines to treat children in prisons.

INK Sonntag-Ramirez Ponce records the frightening truth with her pencil. In large-format pencil drawings, one comes face to face with the fate of these children. On occasion of an exhibition opening at the Federal Development Ministry, Berlin, in autumn 2016, Dr. Gerd Müller, Federal Minister for Development and Economic Cooperation, put it as follows:

“The pictures are artistically incredible, striking, gripping… hitting the heart, right to the core… and they should.” Furthermore: “Unfortunately, there are many crime scenes in the world where the littlest are the greatest victims – worldwide, two hundred million children alone are homeless. We have to take care of these children, because they are our future: We have to protect them from violence and abuse, give them an education and, thereby, a perspective in life.” 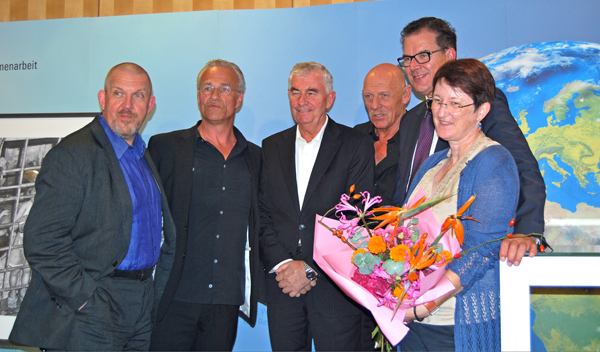 In 2011, the artist, who has received several national and international decorations, was awarded the St. Leopold Peace Prize for humanitarian commitment in art in Austria. On this occasion, she was able to apply to the founder of the Peace Prize in favour of the project in the Philippines. Consequently, the entire co-payment for the construction of a new home for girls recovering from abuse in the Philippines could be financed, so that this asylum could be built upon application, arrangement and assistance of the association “Tatort – Straßen der Welt e.V.” in cooperation with the Federal Ministry for Economic Cooperation and Development in the Philippines. Father Shay Cullen of PREDA led and animated the construction. Girls do not only find a home, education and regular meals there, but also the urgently needed trauma treatment. The actors inaugurated it after completion. Concurrently, there is also a home for boys.

In autumn 2016, the exhibition was on display at the Federal Development Ministry in Berlin, and, in winter 2017, at the ministry’s headquarters in Bonn. In November 2017 – at the award ceremony of the Martin Buber Plakette human rights prize to Father Shay Cullen – the works “spoke” for children’s rights at Rode Castle in Herzogenrath/Eurode.

“How great the power of art and image to reveal the truth of life and lift up the spirit and open the mind and heart to the human condition in joy and in suffering. May the inspiring art of children bring change to all who view and see them and move them to act for justice and love.”

“The pictures of INK tell a great but painful truth,
the condition of children in need.
They advocate to Rights of the child.
They inspire active to be involved … and make this a better more loving world.”

“No other artist known to me is able to give portraits that special expression like you do. Not pictures, but life stories at a glance. Thank you for putting your great art into the service of a good cause, for reaching people with your paintings.”

Joe Bausch on the occasion of the unveiling of Father Shay Cullen’s portraitGelnhausen, March 04, 2015

“Dear INK, thank you again for the initiative and for hanging tough.
And for the great pictures!!!!
More!”

Joe Bausch in the German Federal Ministry for Economic Cooperation and DevelopmentBerlin, September 27, 2016

“In memory of the famous evening of your vernissage at the BMZ in the fight for the children of the world! Cordially”